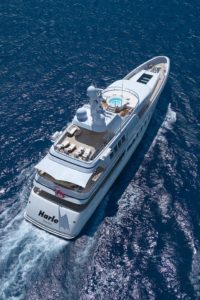 The Whitney Laboratory for Marine Bioscience of the University of Florida conducted another expedition collecting plankton samples. On its two week trek across the Atlantic from Florida to Bermuda and then to the Azores, crew aboard D/Y Harle of Fleet Miami assisted with the deployment and retrieval of plankton nets. Collected plankton samples were observed, studied, identified, and preserved for further genome sequencing and analyses.

The tiny, planktonic organisms, such as copepods, salps, ctenophores, and juvenile cephalopods that were collected during the cruise, are integral members of marine ecosystems and play a vital role in the health of our oceans. By collecting samples and sequencing planktonic genomics, researchers aim to learn more about these critical species by identifying and tracking them to assess their connectivity and dispersal.

This was the first expedition aboard D/Y Harle, but one of many other SeaKeepers expeditions supported by Fleet Miami. This trip also marked the first time that two research trips were conducted for the same lab simultaneously. D/Y SAM supported another SeaKeepers expedition with researchers from the Whitney Lab collecting plankton samples in the Pacific from April – May 2017. More information to come soon.
Partner Sites:
The Whitney Laboratory for Marine Bioscience
Fleet Miami