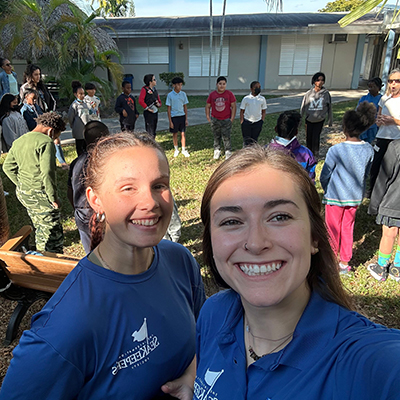 Blue Scholars Initiative has been working with these students at Greynolds Park as a part of a 4-part, hands-on curriculum that aims to ​​engage students in marine biology, marine ecology, and watershed concepts while providing a better understanding of, and connection to, the marine ecosystem and the impact of human stresses. Toni, our SeaKeepers Education Manager, and Sarah, our Program Support Specialist, were lucky enough to join Meredith Bass from Blue Scholars to facilitate part 3 of the series where students participated in activities that simulate how humans interact with the complex dynamics of our marine systems.

The group had the opportunity to learn about the hydrology of watersheds as well as the anthropogenic threats that watersheds face. These include plastic litter, marine debris, air and oil pollution, nutrient pollutants like fertilizers, and more from terrestrial sources like homes, businesses, and roadways. This pollution is carried by rain and flood water to canals, rivers, and bays, which can build up and lead to algal blooms and fish kills, which have been increasing in frequency and intensity in places like South Florida. Students also learned about marine food webs and how complex and fragile they often are. By identifying different types of marine producers and consumers, students were able to connect creatures together through predator-prey interactions. This way, they were also able to identify how the food web dynamics change when a new species is introduced or a previous species is taken out of the web, illustrating how our actions as humans can have a significant impact on the ecology of our oceans even if we can’t see it directly.

Through these activities, we aimed to assist Blue Scholars Initiative in educating students in Miami-Dade County about the impact their actions and choices have on the local and global marine environments. Additionally, students were able to learn about marine ecology, biology, and hydrology as pertinent to Biscayne Bay and beyond to provide context to how we interact with complex ocean systems.