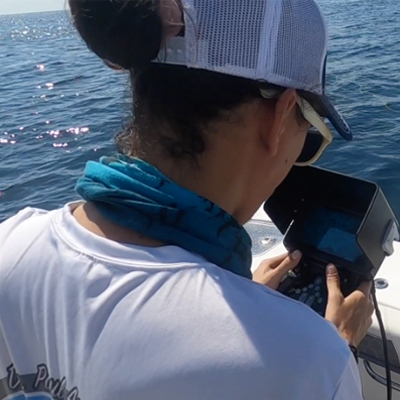 On June 20th, 2022, the International SeaKeepers Society assisted Nova Southeastern University's Dr. Paul Arena, and researchers Michael McDonough and Colleen Mcmaken in the twelfth outing of an ongoing project that began in 2018, to monitor the health of Florida reefs. A commercial-grade mini Remotely Operated Vehicle (ROV) was deployed from DISCOVERY Yacht Santosha to further investigate what bathymetric mapping and submersible dives have recently discovered as an area of deep reef that has been covered by the spoil produced by dredging in the Port Everglades Inlet. The reef area to the north and south of the buried area serve as controlled variables for comparison being that they have been unaffected by the dredging and have remained in a natural condition. Because of the area's depth, SCUBA surveys are restricted, and the ROV was used to record video surveys of these areas which allows for observance of fish communities that are associated with various benthic habitats in the mesophotic zone.

Long term, data collected in this study can be used in the future to implement more informed dredging procedures in order to minimize the destruction on surrounding reefs and protect the overall health of local marine ecosystems. Short term, the graduate students helping to conduct this research have presented the results of their work to Professor Arena’s Bio 3200 Ecology class since 2019. The last meeting of the course focuses on ecological research and the ROV study, impacting the next generation of marine scientists.