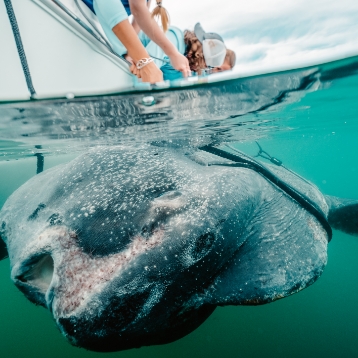 The purpose of this research is to learn as much as possible about the Mola Mola (Ocean Sunfish). It is the largest boney fish in the world, yet almost nothing is known about this ocean giant.

From August 9-15th, 2022, The International SeaKeepers Society faciliated a research expedition in collaboration with Beneath The Waves, The Univeristy of West Florida, and The University of Miami. Over the course of the expedition, the team, led by Dr. Ollie Shipley, cruised from Hyannis, Massachusets to Chatham on the southeastern corner of Cape Cod, in search of Mola Mola. Eventually ending up stationed in Provincetown on the northern tip of Cape Cod, the team searched for, and found several mola mola inside Cape Cod Bay. A total of nine mola mola were tagged with satellite tags pop-off tags, as well as acoustic tags. Acoustic tags emit a ping with a unique frequency, which track the animals’ underwater movements via acoustic “listening station” arrays.

In addition to tagging each fish, body length measurements were taken, as well as GPS coordinates and water temperature. These giant animals are like floating ecosystems, hosting different types of parasites and algae, as well as micro organisms, and for that reason, swabs were taken of the mucous found on the skin, in the gills, mouth, and cloaca. The microbiome data will go toward research being conducted by scientists at the University of Miami. Finally, DNA from the animals, as well as environmental DNA was collected and will be studied by Dr. Alexis Janosik of UWF.

This is only the start of what will be an ongoing research effort to learn more and more about these animals. The more we know about any species’ place and role in marine ecosystems, the more we learn about how the absence or over abundance of that species can negatively effect the delicate balance that is needed for a healthy ocean, and in turn, a healthy planet. additionally, any time we learn about any unique genetic traits that certain animals possess, we start to learn more about our own biology, giving way to possible medical applications.

Beneath The Waves, The University of West Florida - Janosik Lab