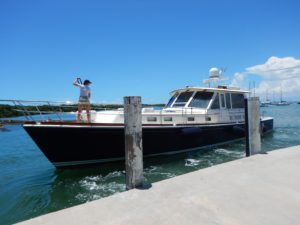 Beneath the Waves spent three days conducting research aboard DISCOVERY Yacht Shredder of Fleet Miami. In total, 24 baited remote underwater video units (BRUVs) were deployed at seven different sites in Biscayne National Park. The BRUVs record footage of marine species which are attracted to the bait. The expedition is part of a study examining interactions between predatory species and prey in marine habitats. Preliminary video review revealed footage of several nurse sharks, eels, various other fish species, and a few sea turtles. Additionally, footage of a critically endangered smalltooth sawfish was taken at one of the sites. The species is not common in this region of Florida and the is the first one ever captured on video!

A special thanks to Crandon Park Marina for serving as meeting place for the vessel.