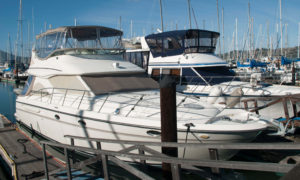 The Golden Gate Cetacean Research (GGCR) team, along with SeaKeepers staff and the owner of D/Y E Cruz, successfully studied the behavior and population of harbor porpoises in San Francisco Bay through photo identification. A preliminary calculation shows 88 porpoises were counted, over twice as many as GGCR has ever seen from a boat in San Francisco Bay, and half a dozen cetaceans were added to GGCR’s ID catalogue. The results of the survey will allow GGCR to correlate porpoise distribution with oceanographic characteristics to designate critical habitat locations.