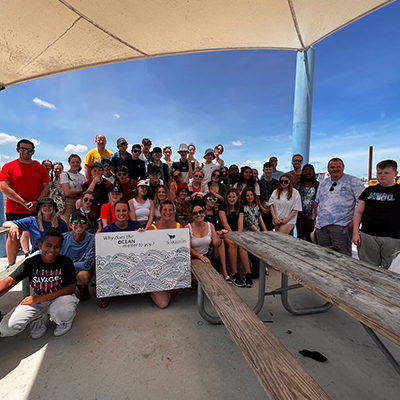 This group was supported by a grant from their government with a mission to engage lower-income schools with the United Nations’ 17 Sustainable Development Goals in pursuit of fulfilling the UN’s 2030 Agenda for Sustainable Development, which aims to stimulate action in areas of “critical importance for humanity and the planet,'' namely poverty of people and degradation of the planet. During this portion of their 10-day ecological trip, students were taught the importance of water quality for wildlife in the bay and communities surrounding it and were able to test for dissolved oxygen, pH, temperature, and turbidity using EarthEcho kits. They learned how all these factors, when grossly outside of normal limits, can cause toxic algal growth and how shoreline pollution impacts water quality. On a broader scale, they were engaged in a discussion of how these conditions in the ocean affect wildlife in the vicinity and people groups around the world and that the effects are not just limited to surrounding coastal communities. On the biological leg of the floating classroom, a net was used to scoop critters out of the Bay’s seagrass habitat and were observed by the group. Some organisms they interacted with included shrimp, seahorses, and lettuce slugs, organisms they do not usually get to interact with at home. Back on land, students cleaned up the marina and its surrounding mangroves to collect 62 pounds of trash and discussed ways they live sustainably at home, sharing with their peers their strategies as well as identifying differences between the waste disposal systems within their own country, and differences they’ve noticed between America and the UK during their time in Miami.

Through the collaborative educational effort on the water with Blue Scholars Initiative’s Thornleigh’s students were given hands-on interaction with goals numbers 12, 13, and 14, of the UN’s 17 “SDG’s,” which encourage responsible consumption and production, taking climate action, and conserving life below water. We are thankful for the opportunity to share our Bay with Thornleigh Salesian College, and have enjoyed our partnership with the Watersports Association and Blue Scholars Initiative. We look forward to working again with them in the future, as well as to a better, cleaner future led by students who learn to love our ocean.

The purpose of this outting is to expose students not typically in close proximity to a marine environment to real science that supports the goals of ensuring sustainable consumption and production patterns, empowers them to take urgent action to combat climate change and its impacts, and teach how the oceans, seas, and marine resources can be conserved and sustainably used for development.