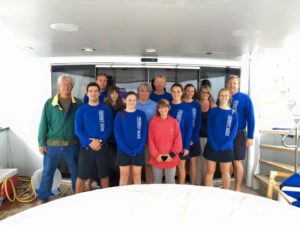 The International SeaKeepers Society collaborated with researchers from the University of Florida (UF) aboard the D/Y Penny Mae as part of a global initiative to survey the biodiversity of the world’s oceans. Dr. Leonid Moroz, the principal investigator from UF and a distinguished professor of neuroscience, genetics, biology, and chemistry, led the research team in plankton sampling along a transect from New York to West Palm Beach, FL.

Tiny, planktonic organisms, which are found in the upper part of the water column, are critical to the health of all oceanic ecosystems, and yet, are the least understood. Collecting samples and performing genetic analyses on these organisms allows for identifying and tracking the origin of unique species. Sampling these animals in waters on the edge of and within the Gulf Stream was especially significant because this major current plays an important role in climate and fisheries in North America, Africa, and Europe. Understanding ocean connectivity across continents is vital.

Over six days, UF scientists and the Penny Mae crew completed 26 tow stations. Each station included five net collections. Each of the 130 samples had at least 400-600 marine planktonic species, with over 95% of the total species collected never having been sampled for genomic analyses. This is the largest sampling of its kind ever obtained to date.

The new and representative species were preserved and photographed for the Museum of Natural History at the University of Florida in Gainesville. The Museum has one of the largest online collections of invertebrates in the world, which will soon include the new species catalogued from this particular trip. Some of the species were also specially preserved for further genomic analyses to identify new biologically active compounds, which could be used in the development of future pharmaceuticals.

The 138-foot tri-deck motor yacht D/Y Penny Mae served as the at sea research platform and enabled scientists to collect and workup samples immediately after collection; this mitigated the problem of tissue disintegration often observed when samples must be brought back to shore for analyses. D/Y Penny Mae, and her tender, Little Penny, both have been involved in several other SeaKeeper expeditions in the past, including shark research in Florida and the Bahamas.