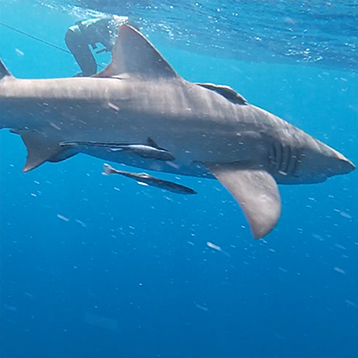 This data is used to monitor community-level biodiversity of shark populations along Florida’s coastline.

This outing took place on December 9, 2022, but is part of an ongoing effort.

On December 9th, 2022, SeaKeepers assisted researchers from the American Shark Conservancy in conducting field research in the waters just off of Palm Beach County. Additionally, we were joined by team members of Earth Species Project, a non-profit dedicated to using artificial intelligence to decode non-human communication. They sought the chance to get out in the field and gain a better understanding of how research happens out in the field.

While diving with lemon sharks and bull sharks, head scientist of ASC, Hannah Med, and research assistant Cassie Scott led the scientific dive, giving a full educational presentation about sharks and shark research and conservation on the way out to the dive sight. Once there, all nine Earth Species Project team members had a literally immersive experience, snorkeling alongside the researchers as they filmed and captured data on the sharks’ behaviors, appearance, and health (skin abnormalities, scars, etc.) as well as their interactions with one another and with the dive team. Measurements are also taken using a special twin laser camera system. As there were about 13 people present, this necessitated the use of two vessels: D/V Bottom Line, and D/V Ghost Drifter, captained by Colton Smith and Alex Carrier, respectively. It was very successful, educational, and exciting day for both the American Shark Conservancy, The Earth Species Project, and SeaKeepers.

Shark populations are subjected to increasing pressures from habitat degradation, pollution, and unsustainable fishing pressures and long-term monitoring can identify negative impacts and help develop ways to mitigate them. This knowledge of how these species utilize Florida's fragile coastal ecosystems is critical to ensuring their sustainable management and conservation. The results and information collected will be used to inform management decisions and translated for the general public to increase awareness and understanding of these vulnerable animals.

The goal of this outing was to observe and record data on the sharks in the area (West Palm Beach/Jupiter, Florida). Team members of the Earth Species Project were also in attendance with the goal of gaining a deeper understanding of how research is done out in the field.